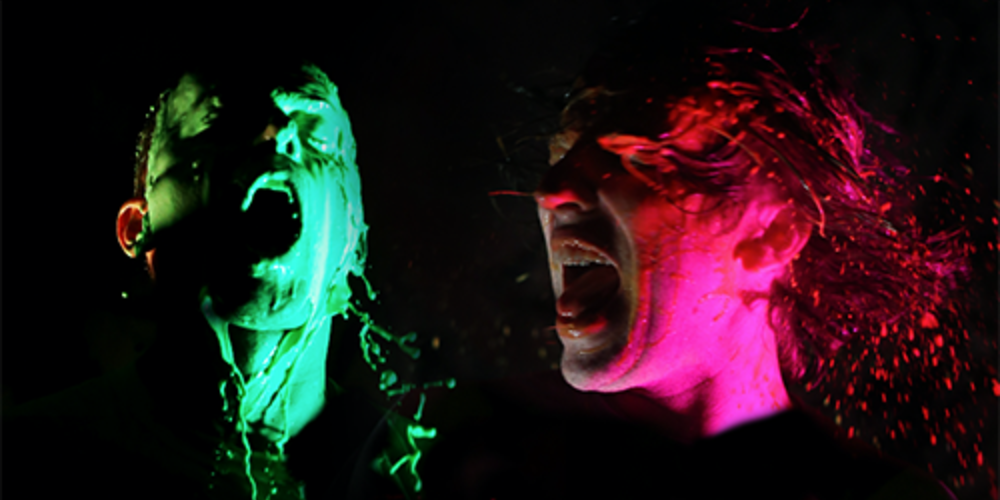 !!! (generally pronounced "chk chk chk") is a dance-punk band that formed in Sacramento, California, in 1996. The band's name was inspired by the subtitles of the movie The Gods Must Be Crazy, in which the clicking sounds of the Bushmens' Khoisan language were represented as "!". However, as the bandmembers themselves say, !!! is pronounced by repeating thrice any monosyllabic sound. Chk Chk Chk is the most common pronunciation, but they could just as easily be called Pow Pow Pow, Bam Bam Bam, Uh Uh Uh, etc.

Shake the Shudder are words to live by and ones that !!! fully embrace. There are always fears to be faced and new paths to forge, and those uncertainties never hold them back. They just propel them to jump in head first. For years !!! have run the dance band gambit and become New York City legends. From their start in Sacramento, to Brooklyn house party staples and Union Pool residencies, and now delighting festival stages from Primavera to FYF, they’ve cemented their place as part of New York’s live dance scene -- while others have drifted into the history books. !!! continuously evolve and grow their sound album to album, deftly navigating through changes in scenes, thriving where others would have been crushed under the daunting nature of inevitably changing landscapes.

Shake The Shudder is a product of their DIY punk roots presenting a harder edge lyrically and sonically, while incorporating trans-Atlantic electronic music influences. Regularly enlisting the aid of talented female vocalists to elevate to their sound, this new album is no exception with the inclusion of up and coming talents Lea Lea and Meah Pace showcasing “energetic breakout performances that only hints at what they do live.” And Nic Offer is no easy frontman to keep up with on stage.

The new record opens with “The One 2”, diving right into this experimentation, “we've always admired this style of dance music from afar and were curious if we could add our twist to it, our twist being a plotline and some attitude.” Immediately segueing into the soon-to-be live favorite “Dancing Is The Best Revenge,” which premiered on Last Call With Carson Daly, the record starts off with a bang and doesn’t let up till the closing groove “R Rated Pictures.”

!!! are typically regarded as a live band, something you have to experience in the flesh to truly comprehend. While their live shows are something to behold, they underscores the sheer musicianship and songwriting that goes into recording their albums. It is a lot of hard work made to look easy. Songs from the record began popping up in sets last year, being worked on live and in the studio, and it is this dedication to their fans to create the best possible live and recorded experiences that drives them to get the best out of both. “Most of the songs on this record are based off of jams, and since we record every jam, most of the tracks here feature moments we actually recorded from those jams. Most artists have to dig through the crates to find that one sample nobody has used but we can sample ourselves having been playing this style of music for awhile now. As a band we try to play it the way the JBs would, as producers we try to mix it the way a DJ would.”